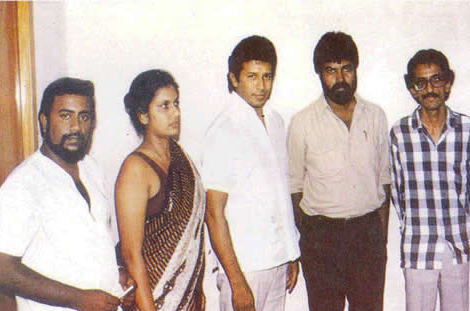 Let’s have a little context, shall we, comrades? When the vast multitude of Sri Lankan citizens was hoping and praying for emancipation from decades of terrorism and was determined to finish off the Tigers, Ajit Surendra Rupesinghe (ASR) was striving pathetically to mobilise opposition to that goal, by creating an organisation termed the Anti-War Front. An Anti-War Front, precisely during the last war! Relatively recent exposures in the media reveal that the Anti-War Front received quite considerable funding from a Western source.

Now for ASR’s politico-ideological coordinates. He proudly belonged to a so-called Maoist international which termed itself the Revolutionary International Movement (RIM), the most prominent member of which was the notoriously barbaric and terroristic ‘Sendero Luminoso’ (Shining Path) of Peru. Another member was the Indian Naxalite movement which is conducting an armed struggle against a secular, quasi-federal, electoral democracy; a struggle which includes attacks on civilians and the decapitation and dismembering of policemen.

ASR’s stance within Marxist-Leninist theory and history is also eccentric. Having joined the Ceylon Communist Party led by N. Sanmugathasan, he produced a long and turgid dissenting document (which comrade Shan showed with me with a smile and shake of the head at the political illiteracy of the author) claiming that the Communist International, Georgi Dmitrov and Stalin were wrong in the one thing that even hostile historians concede they were correct: the Popular Front period and World War II, i.e. the formation of the broadest alliances against Nazi fascism, nationally (including with the bourgeoisie) and globally (with the US and UK).

Triangulate these three coordinates and ASR’s diatribe against me is entirely comprehensible and consistent. What is a little cheap is that he lies. I have never said that state sovereignty is above people’s sovereignty. Not only have I not said that, I have said exactly the opposite! To give just a single example, in my polemic in defence of state sovereignty with Dr Nihal Jayawickrema (‘the State of state Sovereignty’ March 31, 2010 Transcurrents) I wrote:
N. Sanmugathasan (right) with Mao

“If Dr Jayawickrama were to content himself with charging that GOSL is abusing the concept of state sovereignty one could scarcely disagree. State sovereignty has certainly been over-invoked and abused by the GOSL in the post-war period; in peacetime. The problem today is that the closer affinity between ‘national sovereignty’ and (republican) ‘popular sovereignty’ has been glossed over in favour of the equation of ‘national sovereignty’ with ‘state sovereignty’ and ‘state sovereignty’ with ‘state security’, which has itself been equated not with the more holistic recent doctrine of ‘human security’ but with the government of the day, so that the monstrous equation concludes with any activity outside the parameters prescribed by the dominant ideology being anti-government activity; anti-government activity being anti-state activity, tantamount to activity against the security of the state and therefore against national/state sovereignty itself — while the role of the state is increasingly defined in ethno-religious terms. An illustration of this phenomenon is the hitherto unprecedented detention of a young Sinhala woman author and convert to Islam. That unconscionable narrowing of state sovereignty to state security and that too defined in the narrowest partisan sense, was perhaps pioneered by the 1970-77 administration of Madam Sirima Bandaranaike and chiefly by Hon Felix Dias Bandaranaike…”

I have also argued against any trade-off between national and popular sovereignty (‘Debating Sovereignty in Sri Lanka’ GV April 12, 2010). Most importantly I have pointed out that the Declaration of Rights of Man and the Citizen’, the iconic founding text of rights in the age of reason and modernity, proclaimed in Paris in the year of the Revolution 1789, says in its third Article that ‘all sovereignty flows from the nation’. Therefore, I argue – and strive with difficulty– for a synthesis between national/state, popular and individual sovereignty (or sovereignties).

ASR argues that the LTTE was not fascist; that it was not one of the world’s most ferocious terrorist movements, that the atrocities of the LTTE mirrored and were a response to those of the state, and that the EPRLF of K Pathmanabha, which was the ally of our Vikalpa Kandayama in the 1980s, was essentially no different from the LTTE. He is wrong on some of these counts and untruthful on the others.

He confuses the ‘regime phase’ of fascism with its ‘movement phase’. The Tigers were of a piece with fascism as movement, but its rule in the North East during the CFA showed structural and systemic similarities with even the regime phase of fascism. As for the role of the bourgeoisie, ASR omits that of the off-shore Tamil bourgeoisie and the conduits of imperialism which are still propelling the LTTE and secessionism globally.
ASR argues that the LTTE was not fascist; that it was not one of the world’s most ferocious terrorist movements, that the atrocities of the LTTE mirrored and were a response to those of the state, and that the EPRLF of K Pathmanabha, which was the ally of our Vikalpa Kandayama in the 1980s, was essentially no different from the LTTE. He is wrong on some of these counts and untruthful on the others. – Pathmanabha and Kethish with southern politicians

Now this identification of the LTTE with fascism is not a piece of idiosyncratic propaganda by me. There may be much wrong with Sinhala society, but if any political formation/entity in Sri Lanka can be dubbed fascist it is surely not the state or mainstream political parties, and if any community on the island bears a resemblance to German society in its compliance with fascism it is surely not the Sinhalese. The editor of the Penguin/Pelican Reader’s Guide to Fascism, a standard text on the subject, Emeritus Professor Walter Laqueur, wrote of the Tamil Tigers in ‘The New Terrorism’, that “in respect of its ruthlessness and fanaticism,[he] could find only one parallel: the fascist movements of Europe in the 1920s and 30s”. John Burns, the Pulitzer Prize winning New York Times journalist described Prabhakaran as “the Pol Pot of South Asia”. In 2010, looking back at the war, The Economist referred to the LTTE as “almost classically fascist”. Robert D Kaplan refers to the “Tamil Tigers, among the post World War II era’s most ruthless and bloodthirsty organisations”.

Greg Sheridan, Foreign Editor of The Australian wrote late last year that: “…the defeat of the Tamil Tigers was a decisive defeat of perhaps the bloodiest and most murderous terrorist group the world has seen.” He goes on to write that ‘Alexander Downer, Australia’s foreign minister for 11 years of the war, tells me: “I know the Sri Lankan government played very hard ball and committed some human rights abuses, but it’s a wonderful thing the Sri Lankan government won that war. I have always regarded the Tamil Tigers as absolutely a terrorist organisation.” ‘(‘Criticism of Sri Lanka ignores Tiger Threat’, The Australian, November 5, 2011)

Ajit Surendra Rupesinghe lies serially. He says I belonged to the EPRLF, which I never did even for a day (and was never accused of). I belonged to the Vikalpa Kandayama, as did Dayapala Tiranagama, Pulsara Liyanage, Ram Manikkalingam, Qadri Ismail and Tisaranee Gunasekara among others, while Nirmal Ranjith Devasiri and CA Chandraprema were among those closely affiliated with the VK through the Independent Students Union (ISU). As for being “the foremost ideologue” of the North-East Provincial Council, it is a trifle difficult to believe how I could have done that since I resigned within months of taking office and publicised my criticisms in an Open Letter which appeared in the mainstream Sunday newspaper in early 1989!

ASR engages in calumny and vilification when he equates, implies similarities between or places in the same category, the Marxist-Leninist EPRLF and the fascist LTTE. An acknowledged expert on the Tigers and biographer of Prabhakaran, MR Narayan Swamy of India Abroad News Service sets the historical record straight in his commemorative piece on the EPRLF’s founder-leader K Pathmanabha, who was the 8th accused in the case in the High Courts of Colombo on 14 counts starting with ‘conspiracy to overthrow the state through violence’ under the PTA and the Emergency; a case in which I was the 1st accused.

“If the Tamil Tigers had not assassinated him, K. Pathmanabha would have turned 60 Saturday. A Sri Lankan Tamil who embraced militancy in the 1970s, Nabha – as he was known – did not have the glamour of Velupillai Prabhakaran. He did not kill at will.

…A humble man, he embraced Marxism like so many of his era. Nabha strongly believed that salvation for the Tamils lay in forging bonds with like-minded Sinhalese and building a new non-racist Sri Lanka. He did not advocate ethnic hatred. In the process, he lost the race among militants to the Liberation Tigers of Tamil Eelam (LTTE) that ballooned with tit-for-tat killings after the 1983 anti-Tamil violence.

The Tamil community then sought revenge. Prabhakaran delivered them what they wanted. The likes of Pathmanabha took a backseat. To the LTTE, men like Pathmanabha were a hindrance to the fight for Tamil Eelam. One day, Prabhakaran sent hitmen who shot dead Nabha and his close associates in Chennai in June 1990.

…When he died, Nabha was only 39 years old. Tamil Nadu Police was lax in their investigations, thanks to which the man who oversaw the mayhem came back to India next year to mastermind Rajiv Gandhi’s assassination.

Nabha was no theoretician or a military craftsman. Like Prabhakaran, he was at home in Tamil. But unlike the Tigers chief, he was passionate about a dignified political deal for the Tamils.

Born in 1951, Nabha was a student activist who became radicalized following the killing of 11 people at a 1974 Tamil conference in Jaffna. In 1976, when his middle class parents sent him to Britain for higher studies, he met fellow Tamils who shared his political views. In London, PLO representative Said Hamaami, later assassinated by radical Palestinians, helped a small group of Sri Lankan Tamils, Nabha included, to take military training in the Middle East. After a while, he returned to Sri Lanka where security forces were looking for him. He travelled in different identities, disguising himself as a worker or a shopkeeper or a student. He lived among farm workers. In 1981, Nabha travelled to Kumbakonam town in Tamil Nadu and laid the foundation for the EPRLF. He remained its general secretary till he died.

He was not without faults. His EPRLF regime was accused of killings and more when it presided over Sri Lanka’s northeast. But his heart was not in breaking up Sri Lanka. He bitterly opposed the LTTE’s killing of innocent Sinhalese. Nabha constantly argued that Prabhakaran’s murderous politics would one day leave the Tamil community in ruins. Even when he died, trying to ward off AK-47 carbine with a pillow, no one would have imagined that he would prove to be so very right.” (“A Sri Lankan Tamil who could have made a difference’, MR Narayan Swamy, IANS, 19 November 2011)

So much for politics and historical truth according to Comrade Ajit Surendra!