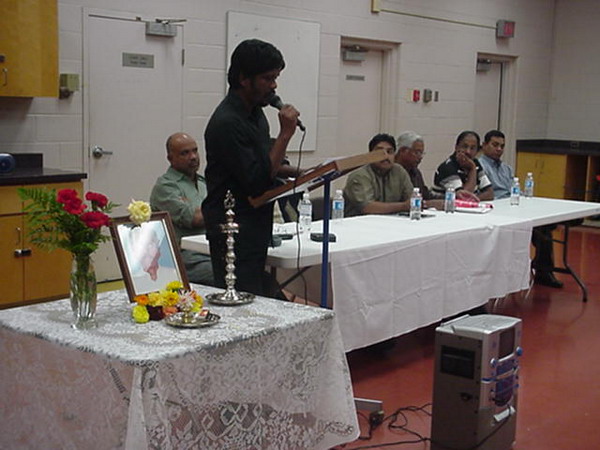 (Tue, 2006-09-12 11:06 — admin)
Toronto, 12 September, (Asiantribune.com): LTTE terrorism cannot be wiped out just by getting rid of them militarily. It was pointed out that the Government of Sri Lanka (GOSL) has to introduce a just solution to the Tamil problem while it tries to defeat the LTTE military. “This would change the hearts of the Tamil people and make them pressure the LTTE to accept the solution. At least this would prevent the people from supporting the LTTE, which would be one way of defeating the LTTE. Therefore it is absolutely important for the GOSL come up with a political solution at this juncture to defeat terrorism.”

A memorial meeting was held by the Canadian Democratic League, to commemorate the late Mr. Keetheshwaran Loganathan, Deputy Director of the Peace Secretariat and peace activist on Sunday, at the Scarborough Village Recreation Centre in Toronto Canada. The meeting started at 6:30 pm and ended at 9:00 pm. The room was packed with people from all walks of life.

Pon Shanmugalingam chaired the meeting and started the meeting by observing one minute silence for all the killed people. There were about 8 speakers, some affiliated to different political parties, organisations and individuals who worked with Kethesh at some point of his life. They had one thing in common to say, they all said that Ketheesh was an honest and peace loving human activist and he always wanted to serve his people.

The first speaker Mr. Namu Ponnampalam, appealed to the JVP to recognise the problems of the Tamils and join hands with the democratic Tamils fighting for their rights and find a solution to the ethnic problem in our country, within a united Sri Lanka.

Another speaker said that Kethesh has been killed because he was a Tamil born in Sri Lanka.

Ajith from JVP said that all the Tamil leaders from Duraiappah to Ketheshwaran have been killed by the LTTE. Hence we have to fight against this terrorism.

Jeeva, another speaker who worked with Mr. Kethesh said that he had been killed because he believed in peace and he wanted to achieve it through democratic means. If actively being involved in finding a solution to the burning ethnic problem and bringing peace to the country in a democratic manner is called treacherous then all of us present here should be proud to call ourselves traitors and continue to work as traitors for the good of our people.

He further went on to say that the freedom struggle started 35 years ago. Then they used double barrel guns to kill the people and now the LTTE is using the most sophisticated weapons in the world, and not only that the most valuable life on earth the “human” bomb. He also mentioned about “Bheeshmar” who in his old age has fallen at the feet of the LTTE and is trying to prolong his life drinking the blood of the Tamils.

He mentioned an article written by Professor Sivathamby under the name Bheeshmar in the Thinakural Tamil newspaper in Sri Lanka justifying the killings of the LTTE.

Jeeva said that he had written in his article saying, if you see a black rope lying in front of you while you are walking hit it with a stick for it might be a black snake which could harm you. If you hit it and it is a black rope then there is no harm but if it is a black snake, then you have done good to yourself. In other words he says if you see someone and think that he is traitor, kill him. Even if he is not a traitor it is okay to kill but if he is a traitor and you do not kill him then you will be in trouble. He had written this in such a manner that even a student from grade 8 would think after all it is okay to kill anybody. He paid his tribute to â€œtraitorâ€ Kethesh and was proud to call himself one too.

The next speaker who spoke about LTTE fascism said that the LTTE had hijacked the Tamil freedom struggle from the Tamils. He said there could be only two sections of people one who support terrorism and the other who does not support terrorism. He also said that we have a Tamil spinner Muralidharan in the Sri Lanka cricket team. Similarly there are spinners in the Tamil media, who give a spin to the real truth and write stories.

Moreover they complain that they do not have freedom to write, which makes me laugh. Not even a single Tamil media in Canada and USA have written anything about the Tamils being arrested in the USA and Canada recently. But they constantly criticise the others. I would say there is real freedom for the Tamil media in Sri Lankan to criticise the Government.

For instant even Ketheshwaranâ€™s killing was justified by many Tamil media spinners. They wrote to the effect that it was a bad move for Kethesh to join the Peace Secretariat, where as they should have criticised and condemned the killing of Ketheshwaran Loganathan. Well, is it wrong for Kethesh to believe that he would be able to do something for his people by joining the Peace Secretariat? He detailed the crowd about fascism and ended with a question asking the crowd to think hard and find an answer, as to who would be the losers if there was a just political solution to the Tamil ethnic problem in Sri Lanka. He also said definitely the losers would be the LTTE and not the Government of Sri Lanka.

James, who was also in the EPRLF with Kethesh, paid tribute to his comrade and said that he was happy to see room full of people with different views gathered for one reason, which to condemn the killings and to commemorate Ketheshwaran Loganathan. He said that comrade Kethesh was killed by the so called â€œunidentified personsâ€. Everyone today knows who these unidentified persons are. He also said that meetings held in Vanni are not real meetings those are meetings held by only one party. But here in this room we have representatives from many political parties participating in this memorial meeting and voicing their concerns.

Bandara a colleague of Kethesh at Centre for Policy Alternative (CPA) said that Kethesh believed that there could be only full freedom Tamils and hence decided to work through the democratic processes. He criticised the CFA and the LTTE. Bandara said that Ketheesh always used to talk about internal killings (Tamils killing Tamils). He did his best to serve his people and died serving his people, which he liked doing the most.

Davidson spoke about his early days with comrade Kethesh, when he founded DEREC in Jaffan in 1981. After completing his higher education in the States he returned home to take care of his fatherâ€™s organisation, which is when he founded DEREC. He was a leftist and helped the EPRLF in many ways including financially. Davison said that when he was arrested by the GOSL in the later part of 1981 and later released, he continued with his political work through GUESS. Since this was a threat to the Sri Lanka Government they started looking for him once again.

At this time Davidson said that he went into hiding and none of his friends or relatives would keep him in their houses. Therefore he had to hide in little villages and move from place to place to avoid being arrested. And at this time it was comrade Kethesh, who helped him move from one hiding place to another in his car. Although he was from a wealthy family and born and bred in Colombo he wanted to serve the deprived people of Jaffna. Hence he joined the EPRLF. His good deeds were not known to the public but today it is being written in every nook and corner.

Davidson said, he was never hungry for power and he was never in the limelight. He served his people sincerely and whole heartedly. He did not get in involved in Tamil politics just for fame and position. He did it for his own satisfaction. While he was in India he went for the Thimpu talks as an EPRLF representative. He was there with the EPRLF during the provincial council time but he did not take up any position in the Council. Some time after the death of the EPRLF leader Pathmanabha, he resigned from the EPRLF and left for Norway to continue his higher studies. There he worked as a part time lecturer.

After a couple of years he returned to Sri Lanka and joined the CPA and later decided to join the Peace Secretariat. Although he very well knew the consequences of joining the Pease Secretariat, it did not stop him from serving his people.

Finally Davidson said that the GOSL has to put forward a solution to the Tamils problem. He said wiping out terrorism is like wiping out West Nile Virus. Although the authorities are praying insecticides everywhere trying to kill the mosquitoes which spread this virus, at the same time they appealing to the public to clear the stagnant waters in their yards and places they know. In the same manner LTTE terrorism cannot be wiped out just by getting rid of them militarily. The GOSL has to introduce a just solution to the Tamil problem while it tries to defeat the LTTE military. This would change the hearts of the Tamil people and make them pressure the LTTE to accept the solution. At least this would prevent the people from supporting the LTTE, which would be one way of defeating the LTTE. Therefore it is absolutely important for the GOSL come up with a political solution at this juncture to defeat terrorism.

The vote of Thanks was given by Mahendran. He thanked the speakers, the Sri Lankan Ambassador and his wife and the pluralists present in the room for gracing the occasion with their presence.