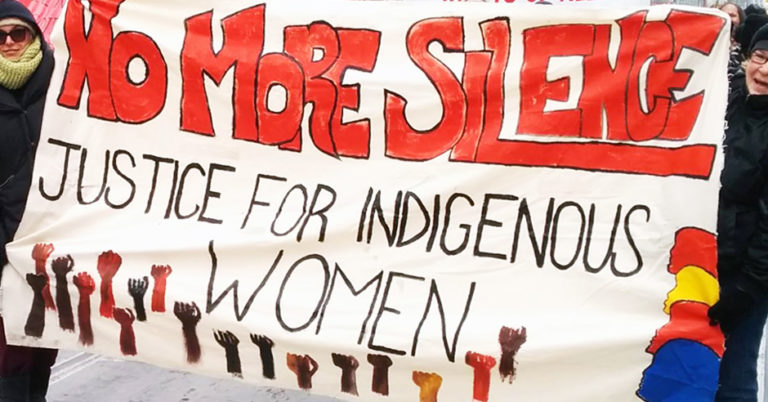 This February 14th, as in past years, marches will be held across Canada to commemorate the thousands of missing and murdered Indigenous women and girls. The February 14th marches demanding justice have been being held for almost three decades, but the current need for action is as great as ever before.

The Communist Party of Canada continues to stand in solidarity with the families of missing and murdered Indigenous women and all those fighting for an end to the ongoing violence. We demand the government act now to deliver on long delayed promises to address the violence against Indigenous women and girls and to reset the Inquiry into Missing and Murdered Women and Girls.

Indigenous women and girls have no other choice but to struggle against racist violence caused by capitalism, patriarchy, the ongoing dispossession of Indigenous peoples and the denial of their national rights to self-determination. The lives of Indigenous women are shattered and cut short by this capitalist social crisis and the negative actions and inaction of the Federal government and police forces across the country.

Included in this is the fight for the inquiry to include a review of individual files of murdered or missing women and of police conduct, after this was deliberately excluded from the initial terms of reference for the National Inquiry. Police actions and inaction are both a cause of violence towards Indigenous women, as in Val d’Or where police officers were the perpetrators of wide-spread sexual and physical assault, or in many cases of murdered women where police failed to take investigations seriously due to deeply ingrained racist views within law enforcement. After public demands from families and allies fought to have the scope of the inquiry widened there is now a commitment to include police behaviour and individual files in the terms of reference.

Indigenous leaders and women’s organizations have expressed serious concerns over communication with the families of victims, the transparency of the process, staff resignations, funding and timelines. In December of last year, a gathering of chiefs hosted by the Assembly of First Nations passed a resolution calling on the Trudeau government to reset the inquiry by demanding that chief commissioner Marion Buller be replaced.

The Native Women’s Association of Canada, who have been campaigning for missing and murdered Indigenous women and girls for four decades, issued a call to action in 2017 to demand a comprehensive inquiry: “We are not asking anyone, especially families, to be patient with this Inquiry as it progresses. We are asking that you remain strong and face adversity with the same determination that has made this Inquiry possible. In solidarity, we will not back down until this Inquiry is what we were promised.”

As calls for an inquiry reset mount and the report and recommendations lose credibility, we demand that the Federal government allow a new leadership for the inquiry to be named through a process of full engagement with Indigenous survivors and families.

The February 14th Day of Action to honour murdered and missing Indigenous women has been instrumental in breaking the silence. The Communist Party of Canada stands in full solidarity with these actions across the country. The fight for justice for missing and murdered Indigenous women is bound together with the fight for an equal and voluntary partnership of nations within Canada, for Indigenous sovereignty and self-determination and for an end to racism and discrimination.