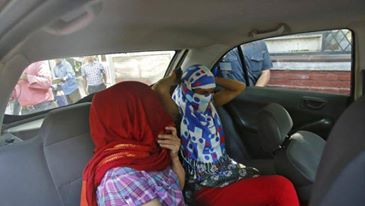 Two veiled Nepali women, who told police they were raped by a Saudi official, sit in a vehicle outside Nepal’s embassy in New Delhi, India, September 9, 2015. Indian police are investigating accusations that a Saudi Arabian embassy official repeatedly raped the two Nepali maids at his home close to the capital, New Delhi, in a case that could reignite the debate over immunity granted to diplomats. The two women, aged 30 and 50, told police they were raped, assaulted, starved and held hostage over several months after leaving Nepal to work for the official.