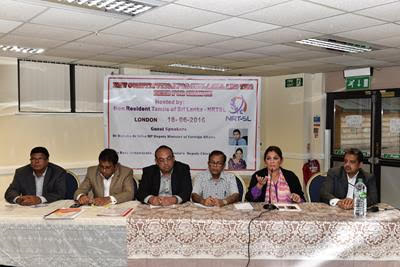 The meeting was jointly Chaired by Mr V. Sivalingam and Mr R. Jayadevan of the NRTSL. Mr Sivalingam outlined the role of the organisation. Mr K.Thambiah, another member of the NRTSL outlined the work done by the organisation. He referred to the on-going public meetings including the well-attended meeting a month ago of Dr Jayampathy Wickramaratne in London who chairs the committee appointed by Prime Minister Ranil Wickremesinghe to provide technical support to the Constitution-making process. Mr Thambiah outlined the NRTSL proposal submitted to the Public Representation Committee (PRC) for consideration.

NRTSL members also met with the delegation of Ministers visiting London, prior to this public meeting and had lengthy discussions about the concerns of the Non Resident Tamil community.

Dr.Harsha de Silva, in his speech painstakingly went through a chronological account of  the progress of the Ranil Wickremasinghe Government over the past six months leading up to this meeting. He said that there was much that had been accomplished to bring credence to the government that introduced legislations to back this work. Highlighting the very programme of the NRTSL, he said that the government has responded to the dual citizenship demand and long list of applications are being dealt at the moment. He further said: ‘restrictions were lifted on obtaining new passports for non-resident Sri Lankans two weeks ago’. In that, he said bona fides of those applicants who left the country under compelling circumstances will be dealt with much lesser burden of proof.

He said about the extent of the consultation process undertaken by the government to enable everyone’s opinions being heard; release of lands occupied by the army belonging to 2,200 families; work on witness protection and taking the unprecedented step to sing the national anthem in Tamil as well on the Independence Day since 1949, which has created the emotional feelings and is a giant step in the right direction in the creation of a new era.  He further said three legislations are being drafted to deal with national security in today’s context which will enable the withdrawal of the Prevention of Terrorism Act .He said the government have established an office for the missing people which enables wounds to be healed.

He said the President has taken the bold step to rename 19th May Victory Day as Remembrance Day. According to him Truth commission, Accountability, Reparations and the future generation are four main pillars that the government is keen to vest its progress.

Mrs Rosie Senanayake went further to eloquently raise gender issues facing Sri Lanka and outlined many areas of concerns for women and children in Sri Lanka. She said that: ‘due to the war, the numbers of widows is over 89,000 persons. There are more female headed households now who require attention and support. The first thing the prime minister did was go to Jaffna to meet with the relevant ministers and engage in discussions, primarily on war widows. A centre was set up for war widows in Kilinochchi so that they could seek help. In terms of children, they have 3 main requirements: nutrition, security and education. We also looked at the state of pregnant mothers and found that an appalling number were malnourished. At the time, I was overseeing these matters Rs. 2,000 per month is given to every mother during and immediately after pregnancy to ensure health and nutrition were in good condition. 26% of children under 5 are not in pre-schools, this is paramount for child’s future’.

She further said: ‘Money was also provided to improve pre-schools and to ensure all children are given an opportunity to education. Sri Lanka at the bottom in terms of females in provincial councils, local councils and in government and the prime minister brought about an amendment to ensure 30% women are represented in the local councils. Another issue is that many females go abroad for jobs facing inhuman treatment and we need to find ways for them to stay with their children in Sri Lanka. Child abuse cases are a huge social issue in Sri Lanka. 32,000 cases are being investigated and it is also estimated that only 10% are reported, so the actual figure of abuse cases are not known. UNICEF conducted a study and found that 80% of child abusers are known by the victim, most child abuse victims are those with mothers working abroad. We are also looking into set aside one day a week in courts for only women and child abuse cases to be heard, this will help speed up the process as normally it takes around 8 to 10 years, by which time, cases are dropped as victims have moved on and don’t want to be reminded by their past’.

She went on to say: ‘I am appealing to you because of the long suffering that everyone has gone through. Sri Lanka will be hugely hit by the UK leaving the EU, predominately because of the fact that it exports 40% of its trade to the UK – leaving will cause the economy to suffer’.

When the former BBC Tamil Service Reporter, commented that it was not justifiable to direct the diaspora to vote one way or other without considering the suffering they underwent to leave the country following the 1983 anti-Tamil violence and had toiled hard and were now reaping their just reward, and they should have a free vote at the referendum. Mrs Rosie Senanayake said that although she understood the depth of the feeling of innocent Tamils caught up in the war, she was  able to make a public apology on her behalf for the atrocities of the 26 year long war, though she was not a party to it’.

Dr .Harsha de Silva commended Mrs Rosie Senanayake for her fortitude in her approach and stated that Sri Lanka had turned a corner in reproach and reconciliation.

There was overwhelming public applause for the stand taken by Dr Harsha de Silva and Mrs Rosie Senanayake for the frank and free discussion.

This meeting was hailed by the participants as one of the historical moments because since the end of the civil war this was the first time a delegation of Sri Lankan ministers met with the UK Tamil diaspora in a public forum and listened and responded to their concerns.