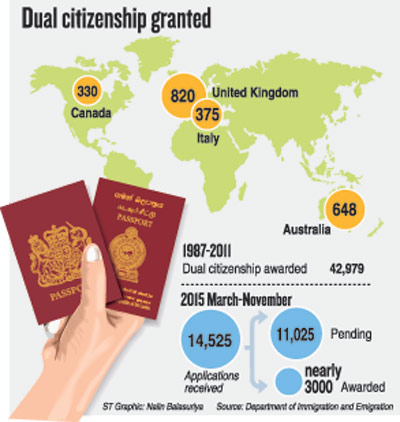 More than 11,000 dual citizenship applications are still being processed out of a total of 14,525 applications received since March by the Department of Immigration and Emigration. Those who have gained dual citizenship According to a senior departmental official approved applicants will have to pay Rs. 50,000 more for citizenship unless, an application is approved by the Minister of Internal Affairs before January1.
The 2016 budget proposal tabled in parliament on Friday increases the fee to Rs. 300,000.

Nearly 3,000 dual citizenship certificates have been awarded since the scheme’s reintroduction by the new regime, the official said, adding that the department will soon grant 500 more certificates to applicants who have already paid the due fees. The awarding of dual citizenship was suspended by the previous regime in 2011 and recommenced in December last year. Prior to its suspension the department had received nearly 2,000 applications.
“With recommencement, we awarded certificates to nearly 350 applicants who had paid the required fee in 2011 but been unable to obtain dual citizenship,” the senior official said. “These certificates were distributed in two separate ceremonies that were held in March and June.
“The other applicants, who had not paid, were asked to reapply.”
“So far, we have obtained the highest number of applications from the United Kingdom,” Department of Immigration media spokesperson Lakshman De Soyza said.There were also nearly 648 applications from Australia, 375 applications from Italy and 330 submissions from Canada.
Any person whose citizenship of Sri Lanka has ceased under sections 19, 20 or 21 of the Citizenship Act No. 18 of 1948 or a person whose citizenship of Sri Lanka is likely to cease, could apply for dual citizenship, according to the department.

While the whole process of granting dual citizenship could take up to four or five months, the procedure of handing over the applications to the authority is straightforward. An applicant residing abroad must, in person, hand over the necessary documents to the Sri Lankan overseas mission in that particular country. This should then be authenticated by the head of that diplomatic mission or a senior officer of the rank of third secretary or above. The necessary documents are then sent directly to the Controller General of Immigration and Emigration.

Once this process is completed the applicant is notified to make the payment. Applications can be rejected if there are problems with the required documents, a senior departmental official said.
For example if applying under the professional category and the applicant is a diploma holder, s/he needs to prove that it is a one-year diploma or higher. (If the applicant has a degree then this requirement does not apply.)
‘If it is not proved the application will not be approved,” the official said.
If the candidate decides to apply under the assets category it must be shown that the land asset is worth Rs. 2.5 million or more. A certified copy of the deed, the valuation report and the title reports must also be submitted.
“A valuation report obtained three months before submitting the application needs to be produced. If the application is older than that, the committee will reject it,” the official said. If the piece of land is in joint ownership the part belonging to the applicant must be worth Rs. 2.5m or more.
If the applicant applies under the fixed deposit category, the deposit must be Rs. 2.5m or above and a copy from a state-approved bank must be obtained. The department does not recognise fixed deposits held in finance companies, the official said.
The applicant must include a letter from the bank stating that the deposit will not be withdrawn within a period of three years. The same rules apply for applications under the treasury bond category.
Apart from the five main categories, a person may also apply as the spouse or an unmarried child of the main applicant. In this case a copy of the marriage certificate or the child’s birth certificate needs to be produced.
A child born overseas will only be eligible if both parents were Sri Lankan citizens at the time of the child’s birth.
“This has to be proved or the application will be rejected,” the official said.